Trouble in my Old Hood. 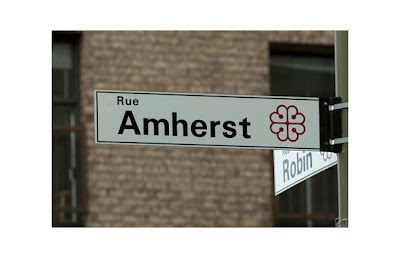 Once upon a time, I lived in the heart of Montreal's village on Amherst street, home of cheap rent, leather boy bars S&M stores and Montreal's only Cuban restaurant. But now a proposed bill would see the street name changed to something less... English.

In an article in the Gazette Nicolas Montmorency (a city councilor) and Les Jeunes Patriotes du Québec (don't ask) are in favor of bringing forth a bill to change all the English street names in Montreal to French ones, starting with Amherst, "Montmorency also wants University St. to become rue de l’Université, McGill College Ave. changed to Avenue du Collège McGill, and City Councillors St. to Rue des Conseillers municipaux."

“Montreal is a French city and streets should be named in a French way.” Wake up asshole, Montreal is not a French city, it is a multicultural playground for people of all backgrounds, you want to rename streets because they sound too English? Move somewhere else and screw up their city.

Granted Amherst was an idiot... He is the one who had the idea of sending blankets infected with smallpox to Indians in order to exterminate them, so perhaps we should change the name of Amherst street for that reason. But we shouldn't change it because of language issues.

People of English background have been a big part of making this city what it is and even if the separatists hate to admit it, the Anglos are as much a part of this city as we (the francohpones) are. We can't erase history and we shouldn't forget where we are from.

Posted by Muchacho Enfermo at 2:03 PM