Reflecting on my Blog

Reflecting upon the short lifespan of my blog I've come realize that it really hasn't done for me what I've wanted it to...

At first I was looking for a place to vent my frustration and anger towards things that I found unfair in the world; which I've done. But I also wanted a place where I could talk about other things that would constantly inspire me to keep writing.

The more this blog goes and the more I realize that I don't wake up with an idea of what to post, I don't walk around going "that's a great idea for something to write on my blog". The exercise of writing this blog was primarily a way to exorcise my demons and it seems to have worked, because now to write this blog I have go through a million news articles in the morning to find something that shocks me enough or makes me angry enough to write about.

I'm not exactly sure what the goal of this particular post is, but I just thought I'd put it out there anyways. Maybe this is the end of this blog, or just the end of this blog as we know it. But either way, for me, it's time to rethink and retool the purpose of my little corner of cyberspace.

Posted by Muchacho Enfermo at 7:47 AM 11 comments:

Labels: blog, My Politicophobia, not political

Iran: The Sea of Green returns

As the tweets in #iranelections roll in this Friday morning, the Telegraph.co.uk is reporting that police showed up to Friday prayers in Tehran and started hitting Mousavi supporters and launching tear gas into the crowds.

This is the first time ever that Friday prayers have not been televised in Tehran and the planned government assault of its citizens might have something to do with it.

As the tweets continue to roll in various reports of two girls being stabbed by pro-government militia keep being re-posted; reports of clashes in the streets, reports of a large crowd of protesters heading towards the state television station and many reports that cellular networks and the internet are down in much of central Tehran keep pouring in. Reuters also confirms that police have been detaining people today despite calls from the senior clerics to free those already jailed following the recent protests.

Kudos again to the Iranian people for having the balls to stand up for what they believe is right despite everything that can possibly go wrong and despite the very real possibility of arrest and grave physical harm.

Posted by Muchacho Enfermo at 7:02 AM No comments:

I'm reading this morning in Cyberpresse that the European Union plans on slapping visa requirements on Canadians wishing to visa any of its member countries.

This is all part of the fallout from Canada's decision to force visitor visas for both Mexican and Czech travelers a few days ago in an effort to lower refugee claims from those two countries. In the first 3 months of 2009 Canada received 3648 refugee claims from Mexico and 653 from the Czech Republic.

So, because we don't feel like processing these refugee claims and having these people stay in the country while we do so, we'd rather have them fill out visa applications which will take time to process and anger our trading partners? Sounds like flawless reasoning on the part of our government.

Just to put this in perspective, over 250,000 Mexicans travel to Canada each year and, according to Statistics Canada 705,000 Canadians traveled to Mexico in 2004. It we're ready to jeopardize this mutually beneficial industry to stop a few bogus refugee claims.

As for Canadians potentially needing visas to enter the EU? by the same Stascan 2004 survey almost 2,500,000 million Canadians travelled to Europe that year... So we stop the "flood" of applications from the Czech Republic (see my second paragraph) and required its citizens to request visas in order to come here regardless to the inconvenience this may cause to almost 2,500,000 million Canadians.

We'll wait and see what the EU does in response to Canada's change of stance on Czech travelers; they have already been quoted as talking about retribution and the Czech have recalled their ambassador to Canada. In the meantime, don't make any travel plans because you never know what might happen!

Posted by Muchacho Enfermo at 8:38 AM No comments:

Disgruntled and soon to be unemployed workers at a Nortel factory in near Paris decided to threaten to blow up the factory if they weren't given proper severance pay. Almost 500 layoffs were planned this week due to Nortel's bankruptcy proceedings here in Canada.

This, to me anyways, is just as crazy at that time in March where French workers held the boss hostage to demand better severance pay.

It wasn't the first "boss-napping" but those have since stopped... now it's bombs around buildings, recently Peugeot, Renault and Citreon employees also threatened to blow up factories if the salary demands weren't met.

This stuff is just messed up, I mean deep inside of me as someone who hasn't always been on top of the food chain: I feel like cheering for the workers who have the guts to stand up to fat cats and demand what they feel is theirs.

On the other side, as a shareholder you know how much money you've lost in Nortel and from a business point of view laying off these workers makes sense: so let's do it.

The problem with both of those mentalities is what I like to call the "Me me me factor":
-The worker is thinking only of himself, not of the thousands and millions of investors that have lost their homes, their shirts, their lives because of the losses Nortel has taken over the years.
-The shareholders couldn't care less about the workers because they want dividends and profits.

All of the above, in some twisted and strange sort of way, makes SENSE it is the ESSENCE of capitalism... Is it perfect? no. But it's dog eat dog and every man for himself. So you can hate the shareholders or you can hate the workers, because in the end everyone is the same: Me. me. me.

Posted by Muchacho Enfermo at 9:41 AM No comments:

To all you JC Haters out there... 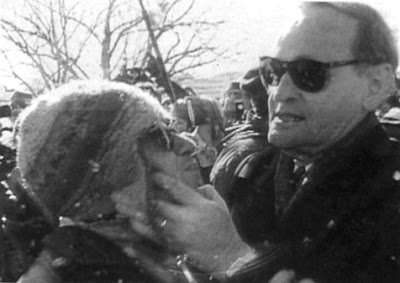 My main man and favorite Prime Minister of all time "Handsome Johnny" Chrétien (seen above choking a separatist) is back in the news after the Queen of England, our head of state, has decided to name him to the Order of Merit (other members include Mother Theresa and General Eisenhower)

I know that I'm not alone that misses this guy... despite the corruption, the choking of people, Shawinigate, the Sponsorship Scandal and all that other crap, I still have much more faith in JC than in any other Canadian politician.

Don't ask me why, I just respect a guy who can climb into the high echelon of politics on willpower alone.

Posted by Muchacho Enfermo at 7:36 AM No comments:

NDP leader calls for realese of Journalist in Iran

That's right everyone, "Jumping" Jack Layton our favorite mustachioed politician held a press conference in the home of Maziar Bahari a Canadian journalist arrested in Iran in the aftermath of the June 12th "election". It's good to see our politicians speak up considering that Reporters Without Borders announced the arrest on June 20th.

When I wrote about it on this blog on the June 21st, I really didn't expect our government to do ANYTHING because last time a Canadian was detained in Iran was back in October 2008 when the BlogFather was taken and I haven't heard about many efforts being made on Ottawa's part to do anything about it.

So congratulations to you Jack for doing the right thing... now if you could only get the Conservatives and the Prime Minister behind you in this effort, maybe it would actually get somewhere.

Posted by Muchacho Enfermo at 1:21 AM No comments:

If you missed it, you're not alone...

I had to find out from a NEWSPAPER that there was a big blogging conference in Montreal that is ending today! The article in the Gazette is called "Web geeks talk about blogging" and is not exactly a Pulitzer caliber article, but that's not the point. The point is that this conference was so poorly advertised locally that neither I or any of my other local blogger friends heard about it.

I emailed everyone and asked, an no one knew about it at all...
Wordcamp Montreal if a conference aimed at those who use Wordpress over 200 bloggers were reported to have attended last night's seminar with Wordpress founder Matt Mullenweg. Various other seminars on how to make templates, "hack" Wordpress cand create plugins were held over the course of the two day conference.

I would have loved to attend, or at least get my hands on some of their material because I've heard so many good things about WP but I think it's beyond my simple little mind because to this day I can't think of a platform I hate more.

Posted by Muchacho Enfermo at 3:47 PM No comments: