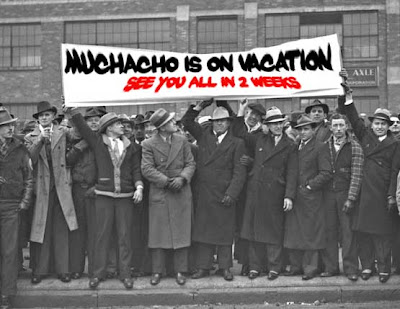 So I'm out of here for 14 days, I'll try to post as often as I can (or remember to) but I think after hitting my 200 milestone I'll take some time off. Comments have been disabled in my absence, but rest assured I'll be back with stories and rants. Take care folks.

Posted by Muchacho Enfermo at 1:08 AM No comments:

In the Globe and Mail this morning there was a short article about how our foreign minister Lawrence Cannon said that China “has made progress” on human rights.

Cannon does tell the G & M what that progress is, on what he thinks China has improved or on what time frame he is basing this statement because if you read the Amnesty International report for China 2007 and 2008, there are no marked improvements.

Cannon also said: “You're much better working on the inside with the Chinese leadership to get things done, than to be outside and criticizing.” Which I might be inclined to agree with, being inside and having a dialogue beats the heck out of throwing rocks at the from Vancouver Island and hope they reach Beijing.

We must all remember that when Stephen Harper was asked about China he had said "I don’t think Canadians want us to sell out important Canadian values. They don’t want us to sell that out to the almighty dollar."

The bottom line is going to have to be whether we prefer China's money and influence or we prefer to hold on to our Canadian values.

Posted by Muchacho Enfermo at 7:20 AM No comments:

And Now the State Department?

When I first posted about Laura Gainey's death and the subsequent withholding of information by the Conservative government, I did not expect that of my 20 hits per day I'd have the Canadian Government read it which they did.

Now, for some reason the US State Department seems interested in the story. 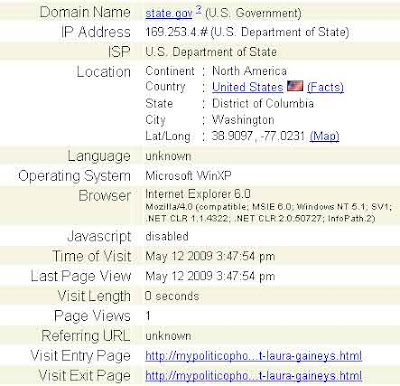 I'm not exactly sure why, but I really wish one of the two governments would leave some sort of comment! Please...

Yet Another Internaiotal Mistake on Human Rights

The council was created about 3 years ago to replace the Human Rights Commission which basically ended up as the butt en of many jokes and had no credibility. I'm pretty sure that this council is heading very much in the same direction since many member countries are known for their lack of respect for Human Rights.

The US, whose recent track record has been put into question and who had boycotted the Council under Pres. Bush, was elected with over 90% of votes in their favor. Russia, despite the death of many opposition politicians was also elected. I find it amazing that a lot of these countries ran unopposed, Human Rights' violators such as China, Saudi Arabia and Cuba ran unopposed.

In a recent report on Reteurs the EU states that they have made no progress on Human Rights dealings with Cuba and that the EU will most likely put sanctions back in place in an upcoming vote. When asked about their position towards the EU and Human Rights, Cuba had this to say:

""Cuba is ready to normalize* relations, to establish a new start in the relationships between the European Union and Cuba," Rodriguez said.
He said the common EU position on Cuba, with its emphasis on human rights criticism, was "obsolete.""

*Normalization is a process whereby behaviours and ideas are made to seem "normal" through repetition, or through ideology, propaganda, etc., often to the point where they appear natural and taken for granted. (from Wikipedia)

The Cuban foreign minister even went so far as to say: "These are legal decisions, and not of a political nature. The Cuban penal system fully complies with all standards in this domain."

This, my dear readers, is what the UN Human Rights Council made up of: Human Rights violators, propagandists, liars and cheaters, with the few exceptions that must be the voice of reason and the voting majority of this council if it is to become credible and viable. If not, I fear that this UN initiative, like so many before will be doomed to crash and burn. 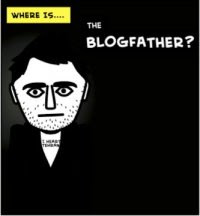 The Associated Press reported that American journalist Roxana Saberi, who had been jailed for four months on charges of espionage. Her trial was held in secret, lasted 15 minutes, her lawyer was never allowed to speak and she was sentenced to 8 years. Then... like magic her sentence is reduced to a two years suspended sentence and she is released from prison.

All the US had to do was say that it would increase pressure on Tehran to release her and they did. Amazing.

What about a Canadian blogger that was arrested back in October? Hossein Derakhshan (AKA Hoder, the Blogfather) was originally accused of being a spy for Israel, then the charges were changed to "insulting religion" although no official charges have been laid (that I know of) and apparently the case is still in the discovery phase. The University of Toronto graduate was reported missing back in October of 2008 while he was visiting Iran, a few weeks later Tehran finally confirmed that they were holding Hoder.

What has our government done? We have demanded a fair trial that's about it. We won't touch the case... why? Who the heck knows but the release of this US journalist makes me think we should be working a little harder. So far the only person I've seen really stand up for Hoder is President Mahmoud Ahmadinejad, strangely enough, who had written a letter to the Chief Prosecutor requesting that they allow Hoder a full and fair defense when he stands trial.

The cries for Hoder's freedom have become murmurs over the internet, but I hope that the release of Roxana Saberi will reignite hope in the hearts of those campaigning for the Blogther's release.

Posted by Muchacho Enfermo at 7:56 AM No comments:

I am a Man Now

This morning I went, for the first time ever, to the barber.
It's not that I've never cared about my hair, it's that I've cared about it so much that I had perfected over the years the art of cutting it myself or having a stylist do it for like 70$.

This morning I was walking outside, it was sunny, I was drinking my "fair trade" coffee and saw a barber shop. I told myself: "Why not? You need a haircut anyways..." I walked in and a surly old man that smelled like Aqua Velva and Cigarettes motioned me to one of the 8 empty chairs. I started telling him what I wanted, he nodded, looked at me and said "So medium, right son?" I told him I guessed that medium sounded about right but no to touch the top, I only wanted the sides cut.

The surly old barber takes out an ancient clipper and a comb and proceeds to "style" my hair cutting most of the sides off, then he takes out a straight razor and cuts the hair from around my ear and the back of neck. All this is done in silence. He then takes the clipper and the comb out and cuts the top.

He then quickly brushes the hair out of my face, tells me it's 15$ and that I look good now.

I turn and leave, a little mystified at the whole experience, but it somehow felt as though I'd gone through some age old coming of age ritual, one that includes having your wishes ignored by a surly and bitter person who, of course, knows better than you. I am now a part of that illustrious group where old men all have the same haircut and young men seeking a hairstyle come out of the barbershop looking like they've just joined the army.

Today I am finally a man...

Posted by Muchacho Enfermo at 11:38 AM 4 comments: