"A man fires a rifle for many years, and he goes to war. And afterward he turns the rifle in at the armory, and he believes he's finished with the rifle. But no matter what else he might do with his hands, love a woman, build a house, change his son's diaper; his hands remember the rifle."
Anthony Swofford (from the movie Jarhead)

Posted by Muchacho Enfermo at 11:42 PM No comments:

So today in the world a bunch of really bad stuff happened: some people died of hunger, other were killed for protesting against human rights violations. Honduras is still a miss. People are being killed in China because of ethnicity. People in Iran are being arrest for supposedly participating in “unlawful and revolutionary protest”.

Children are dying of hunger in some place far away because of stupidity. The US bombed the crap out of Swat. In Sri Lanka, people (including Canadians) are being held in horrible re-education camps because the government suspects them of being Tamil Tigers.

In some other place, natural disasters have rendered people homeless. The world economy is still on the brink of collapse. North Korea is firing missiles all the time.

But who care because the MOST IMPORTANT news of the day is that Michael Jackson died… like two weeks ago.

To everyone that produces the evening news, the news websites and newspapers: Please, get over it!

Posted by Muchacho Enfermo at 7:35 AM 3 comments:

Happy birthday to Claudia Cadelo! A brilliant Cuban blogger I had the chance to follow since the inception of her blog Octavo Cerco and a person I got a chance to know through two interviews I did for Ashin-Mettacara.com (see links to interviews as posted on this blog here and here) 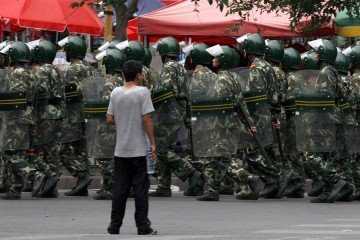 156 people were killed in race-riots in the Xinjiang region of China... The tensions between Uighur minority and the Han majority seem to have boiled over again, prompting China to send over 20,000 police, army and firefighters to the area to reclaim the streets.

Amazing! Didn't we just have the Olympics in China? Where peace and a harmonious society was supposed to prevail? Perhaps not everyone in China shares the "government's" point of view on harmonious living, especially in the ethnic (for lack of a better term) regions of the country such as Tibet and Xinjiang, where tension between the natives and the Chinese has been constant, or so it seems to us in the west.

China has slowed mobile phone and Internet services, tried to block Twitter and many social networking sites in order to attempt to put out the fire in the area and prevent those fighting from communicating. China is also saying that outside influence sparked the deadly riots.

I'd really like to say that one side is wrong and one is right... But my understanding of this whole business just isn't enough to render an educated judgment, so I'll just leave it by saying:
156 dead? because of race? It. is. utterly. stupid.

Hey Everyone... Montreal is Protesting too!

One of the great things about this country is freedom of assembly, it's something we often take for granted.

It warms my heart when I see people join together and march in support of those in Iran; I find it just that people can walk down the street show their support for Tibet, I can even accept the stupid communist march on May 1st... but the latest protest in Montreal is beyond my comprehension.

People held a rally a few days ago at the Bell Centre to urge the Montreal Canadiens to resign Alexei Kovalev. Seriously. A hundred people used Twitter and Facebook to coordinate an action to all meet at the arena, dress their kids with the "Bleu, Blanc, Rouge" in the middle of summer and protest because the hockey team doesn't want to give Kovalev 6 or 7 million dollars pert year. Are you impressed? Cause I'm not. 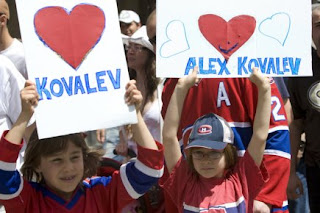 In fact I'm a little embarrassed for these people and especially for their kids that didn't have a choice but to come along. But stunted childhoods put aside... Here's the kicker, while the rest of the world doesn't seem to be getting any better: People are being arrested and will likely be executed in Iran for assembling and marching, people in Honduras are being shot by soldiers for assembling and protesting, there are over 2100 political prisoners in Burma because of assembly and protest and here... We assemble, march, assemble and protest for a pro hockey player?

This can mean two things:
1- That Montreal is a really fantastic city with absolutely no problems, where everyone eats, has a place to live, no one gets stabbed and beer is cheap.
OR
2- People are idiots and have nothing better to do.

I'll let you draw your own conclusions, I think my opinion on this matter is pretty clear.

Posted by Muchacho Enfermo at 8:16 AM 3 comments: 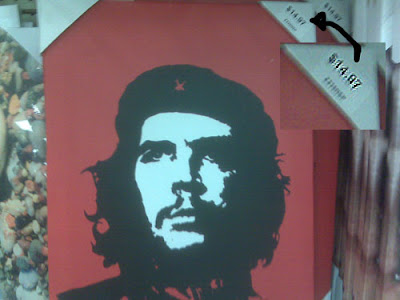 Walking through Zellers a few days ago I found in a discount art bin a reprint of the famous Che painting that you can see above... I took a picture with my blackberry but the price still came out blurry... The price (if you can see it) reads $14.97 (that's 12.87 USD, 9.22 EUR, 11.88 CUC). And I had to ask myself, if they're liquidating Che art is the Revolution in better shape then its poster-boy?

So I went to the internet and searched for answers and according to an article in Reuters Fidel Castro himself foresaw this whole economic downturn 26 years ago when he said: "The current state of the world economy and its gloomy outlook should lead to a profound reflection in governments and in the most lucid minds of the developed world."

But according to an article in Itar-Tass: “Since the signing of the agreement (on granting a state credit against Russian goods and services) the Cuban side has three times violated the payment terms. However, the credit provision has not been suspended and no fines were imposed as for June 1, 2009.”

So did the "Fearless" leader actually see this coming 26 years ago and fail to plan? Or is Cuba just not paying its debt because it's slowly gearing up for yet another Special Period?

With Che paintings selling at discount prices and the decline of sales Che t-shirts one wonders if people are undergoing (in Castro's words) a "profound reflection" on if they feel like advertising a murderer and spending their hard earned fast disappearing money supporting a government that spits on human rights while criticizing everyone else for doing just that?

So to answer my original question:is the Revolution in better shape then its poster-boy? The answer is that I think the Revolution is in the same sad state as its bargain basement hero: old, tired, cheap, over publicized, underachieving and dead.

Posted by Muchacho Enfermo at 12:52 AM 3 comments: