Is Cuba on the verge of bankruptcy? Reuters reported on Yahoo Argentina that Cuba head was on the verge of financial collapse and had to stop honoring large wire transfers from foreign companies as their cash reserves are almost depleted. The Castro Cartel blames the hurricanes that hit the island last year, but in reality Cuba had been negotiating with its lenders prior to both hurricanes in order to lower their interest payments so they could meet their financial obligations to the foreign nations that had lent them money.

As a tourist in a hotel last October it was hard to tell that there had been two major hurricanes that had hit Cuba but the second I left the hotel and got on the bus the effects of the storms were instantly visible. The little stands and restaurants in the cities had doubled the price of food and halved the portions; short crops were being grown in a fruit producing province; the houses that were already battered and nothing more than shacks looked like inhabited rubble.

Cuba truly is on the verge of financial collapse and is trying to avoid bankruptcy...

If I was Raul today I’d be worried:
History has shown us famine leads to dissent and rebellion.
The people are hungry, literally hungry for something to eat...

But what their stomachs and their souls are rumbling for is something much bigger than a meal, they are starving for Change.

Today is the day… It’s the day that I can definitely say that I’ve given up hope on my people. The Québécois have gone off the rails in a new linguistic spat that just makes me want to hurl my Tim Horton’s coffee at my screen.

Author and Editor Michel Brûlé has published a book called « Anglaid » which for those of you who don’t speak French is a pun on the words ANGLAIS (English) and LAID (ugly). The free daily paper The Metro published on the 21st of April an interview with him that the Defense Association of Anglophone Quebec had the courtesy to translate into English for your reading pleasure. Here’s a few excerpts along with my thoughts.

Q: We sense anger in your book.
A: “Yes, for sure. First of all, English is not a beautiful language. Intolerance and all the movements -the most extremist, racist and segregationist, is the KKK, White Power and the expression “speak white” They are all English things. They come from the US, Canada and the United Kingdom. There are none more racist than the English.”

Q: What reaction are you waiting for from the public?
“I did a lot of research work for this book. I hope it becomes essential. I believe my book should be taught in the schools…”

Q: Do you have English friends?
A: “That has no link (connection). We all have an individual personality and another collective one. If I said the Americans were a bunch of big (slang), obese, imbecilic, ignorant, uncultured, it’s the truth. But it’s sure and certain that of 303 million Americans there is about 50 million who are not like that. But collectively they are still a bunch of uncultured imbeciles...”

On to my comments (and hopefully yours)…
-No one is more racist than the English…
What about your book asshole? Isn’t that kind of really racist? Isn’t that kind of a double standard? How many hateful English people do you know? And who asked for your opinion anyways?
-You did a lot of research for this book…
Where? In a Cracker Jack box? By talking to grade 4 drop outs (no offense meant to grade 3 or 5 dropouts)?
-You want this book taught in schools…
Even the English schools? Or do you want those to be closed as well and rob the 700,000 Englsh-Quebeckers of their education rights as well?
- But collectively they are still a bunch of uncultured imbeciles…
I’m pretty sure you got that backwards; it seem that people like you that are the uncultured imbeciles.

So in conclusion Michel and his merry band of idiots can all get on a plane back to France if they hate the rest of North America and its inhabitants. Sir, YOU are the reason that PEOPLE LIKE ME have a bad reputation abroad and I seriously wish we had laws to shut people like you up. Oh wait… we do, please check the criminal code of Canada sections 319(2) and 319(7).

If you’d like to voice your outrage Michel Brûlé can be reached at:
michel@michelbrule.com
Or by phone :
514.680.8905 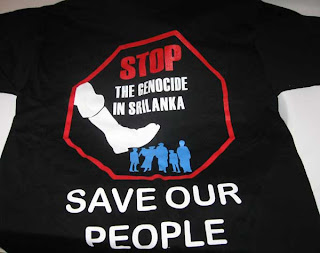 (T-Shirt that I got from the Tamil Student Association Today)


As a Canadian, whenever I hear talks about Tamils it's usually referring to the Liberation Tigers of Tamil Eelam, better know here as the Tamil Tigers. They are a group of rebels in Northern Sri Lanka that have been engaged in a conflict to give the Tamils their own homeland. Over the years they have been accused of committing atrocities against civilians and commissioning the assassination of government officials.

For all the bad that the Tigers are known for their airforce also played an intricate part in the tsunami relief effort a few years back; *according to Tsunami Evaluation Coalition the key NGOs that responded also claimed that the LTTE forces provided extremely efficient and focused leadership and support to the relief effort.

But today I'm not writing about the Tigers or the surrender of some of their commanders. Today I want to write about the thousands of Tamils that inhabit the area (that until today) was controlled by the Tigers. The 3,000,000 Sri Lankan Tamils that are caught in the fighting. The Red Cross today is saying the 26 year old civil war has a reached catastrophic state. In fact 62,000 people had fled at the time the story was published and thousands more have fled since. In all over 70,000 thousand people have died in this conflict and Tamils along with Humanitarian Agencies accuse the Sri Lankan army of slaughtering over 1000 Tamils in the last few days.

International calls for peace, or at least a truce to let the refugees leave the territory unharmed have been ignored by the Sri Lankan government that has been pushing forward with their offensive against the Tigers. The Tigers are indeed a force to be reckoned with and a hardline organization for sure, but lets not forget the women and children and innocent people that live within their controlled territory.

Tamil Montrealers I have spoken to this morning claim they have received news from Sri Lanka that the government of Sri Lanka is on a quest to exterminate their people. Seeing how the calls for a cease-fire to save potential refugees have been ignored by the government it's hard for me to think otherwise until someone in Sri Lanka proves me wrong.

Should Canadian and Women's studies be axed?

On Globecampus.ca there was a poll asking: As budgets shrink, do you think universities should cut programs like Canadian Studies and Women's Studies if they get fewer students?

My answer was a NO, as it should be with every other Canadian out there. These programs, while not always the most appealing to the student masses are the ones that help us understand Canadians' progress through time. From Women getting the right to vote to the feminist movements, to the intricate forgings of our constitution. I can't believe anyone would suggest axing educational programs in favor of government slush funds and shovel ready projects.

Education is the corner stone of any society, a highly educated society is a productive society that will be more profitable in the end than any stimulus that is implemented now. Cutting these programs will open the door and facilitate cutting other programs with a lower enrollment rate and I don't think that that is the message Canada should send to its young generations.

I've always heard that the youth was our future... Let's not prevent that future from knowing about their past. 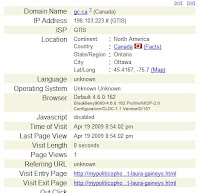 So I was looking at my stats today, as I usually do every few days and I noticed that this is the 3rd or 4th time that I get a hit from gc.ca about this post... If it really and truly is the Government of Canada, I'd love some comments on this post from them!

UQAM teachers ask for too much

The professors at UQAM (Université du Québec à Montreal) have been striking since March, students are now accompanying them. The student union has voted 63% in favor of a walkout until April 27th in order too support their professors.

The teachers' union is demanding an 11.5% wage hike of 3 years and the immediate hiring of 300 professors. The province has offered an immediate 4% raise and the hiring of 25 new professors.

In a time of global economic crisis, teachers with pension funds, tenure and benefits are walking out to demand more money and more teachers? Please folks, don't be greedy. This is a time where most of us have to justify our jobs and re-interview for positions we've held for years and here you are with your jobs that you practically CAN'T get fired from and you're asking for more?

Why not sign a provisional contract for 1 or 2 years, take the 4% with an option to renegotiate when the economy does better? That seems fair and reasonable to me and maybe the people of Montreal would be on your side instead of complaining and giving the university yet another black eye following last year's 400 million dollar bailout we gave you that came from our taxes.

But then again, what do I know, I'm just a blogger without tenure or a PHD...

Posted by Muchacho Enfermo at 6:35 AM No comments: