Take Advantage of the Desperate

Humanity once again disappoints me, this morning when I read my paper I notice an article about a drug raid in Montreal, which is really nothing new. But this one was for counterfeit medication.

The RCMP (Royal Canadian Mounted Police) seized fake Viagra and fake cancer drugs arresting 9 people in the process. The fake Viagra isn't the one that makes me mad or upset, I understand that most men don't like going to their doctor and saying "dude my business doesn't work" so they buy stuff of Ebay and in the street.

But the fake cancer drugs? That pisses me off to no end. People who can't afford actual cancer medication are purchasing this drug who think that will help heal them, save their lives, ensure that they can see their children grow up; only to die a year later because the drugs are fake or bad?

I hope these people rot in jail for long LONG time, sadly though our justice system is lacking and they were only charged with "fraud, conspiracy to commit fraud, and infringement of a registered trade-mark and distribution of materials protected by copyright". What about reckless endangerment, involuntary manslaughter and drug trafficking? Or any number of charges that would actually carry some sort of sentence that was fitting to the crime.

Once again, people have failed us and I'm fairly certain that our justice system will fail us as well.

Posted by Muchacho Enfermo at 9:54 AM 4 comments:

4 Montrealers Arrested for Rape in Cuba

I read in a little newspaper snippet on the subway this morning that four Montrealers had been arrested and are currently being detained in La Condesa prison in Cuba for the alleged rape of a 23 year old Toronto woman. The only English language article I found was HERE.

In the French language articles, it is probably worth mentioning, they mention that the 4 men say that after partying with this girl in Varadero she consented to go back to their room and have sexual relations with all of them. They then proceeded to send compromising photos to the woman's father in Mississauga. An attorney representing 3 of the 4 men claims that the woman is claiming she was raped in order to save face in front of her Muslim family.

I think that either way, rape charges should be taken seriously and that if these men really did rape her that the time they spend in Cuban jail while the investigation (which may take up to a year to complete) is underway will be a good way to start the whole punishment process. If they didn't however rape this woman, well, I really have no comment to add.

I've often wondered what jails would be like in Cuba for foreigners as compared to how Cuban prisoners are treated. I guess that these four are finding out first hand.

Posted by Muchacho Enfermo at 1:00 AM 7 comments:

Youtube video of the laments and protests of oppositions supporters under the cover of darkness.

Posted by Muchacho Enfermo at 11:05 PM No comments: 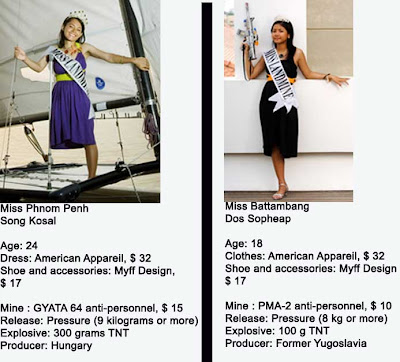 That's right, you all read the title and for once it's exactly what it's supposed to be with none of my usual typos. According to the Associated Press the Cambodian government has decided to cancel the Miss Landmine 2009 pageant. Because it claims that it is an insult to the disabled.

Miss Landmine has been held as far back as 2007 in Angola, and the pageant's aim is to raise awareness about the very real problems that landmines have caused and still cause around the world. The Ottawa treaty served as a reminder to the world of how bad the situation with landmines was, with 156 countries signing on ( the Notables who did not: China, India, Russia, USA).

The pageant in Cambodia was to feature some 20 contestants, they're photos and profiles are available at Miss Landmine's website.

Personally, I love the idea behind this contest. I think that if anything, in this vain and superficial world we live in, it's important to show the other side of beauty. I think that this contest is probably the one beauty contest that I would actually watch and vocally support. So my hat is off to the women with enough guts and confidence to know that despite burns, disfiguration or loss of limbs they are still beautiful.

The trials of protesters and government opposition are underway in Iran. Criticism from around the world hasn't stopped, the #iranelections channel on Twitter is still going strong.

Even those inside Iran's government are calling for a simultaneous trial of those who hit, abused, burned and murdered protesters but apparently the cry from within has yet again fallen on deaf ears as the government has made no moves to bring charges against those at fault.

In today's Globe and Mail Moshen Rezaei, a conservative challenger to the "president" said that trials of those responsible for the attack of protesters and torture or prisoners should go forward, “otherwise, justice will not be realized and it is possible that unrest will not end.”

While former president Mohammad Khatami called the trials a sham and said they would do nothing but “lead to ignorance of the real crimes”. The defendants' lawyers were not allowed to access court files or enter the courtroom. The former president then went on to say “As far as I have learned, what happened in the trial was contrary to the constitution and law, as well as citizens' right.”

So it appears that the Sea of Green, despite its best efforts, is subject to yet another injustice by their government and its choke hold on the population continues. I've said it in previous posts that any court called a Revolutionary court will never give true justice... Iran has yet again proven my point.

I don't know why I'm surprised though, the authorities and the militia have been acting like judge, jury and executioner since June 12th, just as they did to poor Neda who became a worldwide symbol of hope and resistance. Now the authorities are just doing it in nicer clothing and with the protective blanket offered by laws that they seem to invent as they go along.

There will be no justice in Iran, but as long as we keep spreading the news, those who have died and suffered will not be forgotten.