It seems to me that when the Universe decides to focus on a country it's never a good thing. Since the days of its independence from from France Haiti has gone from being France's richest colony to one of the world's poorest countries.

In 2004 the country faced a rebellion from within and a massive food shortage, in 2008 hurricane after hurricane pummeled the nation and now in in the 2nd week of 2010, the strongest earthquake in over 200 years rocked the capital city of Port-au-Prince. 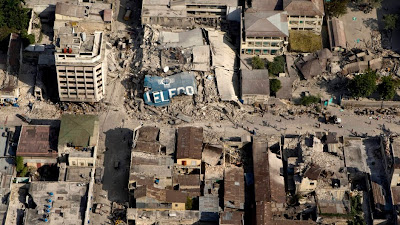 Report vary but one thing that people seem to agree on is that mostly any building taller than one story is reduced to rubble. Death toll estimates vary from 50,000 to over 100,000 in Port-au-Prince. With a population of just over 1million and very very few first responders we can only guess that those figures will rise dramatically as Haitians pile the dead in the streets and wait for foreign aid to trickle in.

Canada has sent its rapid response team (DART) to Haiti and pledged 5 million dollars in aide, the UN has pledged another 10 million, the US is sending a contingent of Marines to Port-au-Prince and countries around the world are showing their support for the battered nation. Hopefully the money and the personnel will arrive in time. 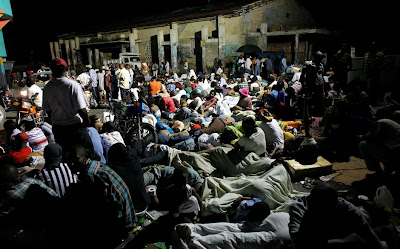 Let's see if this international show of support will become a long term feeling of goodwill. Let's see if countries, such as Canada, that has a huge native Haitian population living within its borders can put together something to compliment the dozens of law enforcement officers we already have there.

Ideally, after the world is done digging out the rubble and helping with this catastrophe, I would like to see the world forgive Haiti's national debt and help put it back on its feet again, really and truly.

For those of you who'd like to help with donations please check the websites of Doctors without Borders, Unicef or World Vision. For Canadians please click HERE for a list compiled by the government of organizations that are helping with relief effort.

Lastly, my deepest sympathies go out to all the families and people that have lost loved ones in Haiti and my prayers go out to those still wondering about those they hold dear.

Posted by Muchacho Enfermo at 8:24 AM No comments: