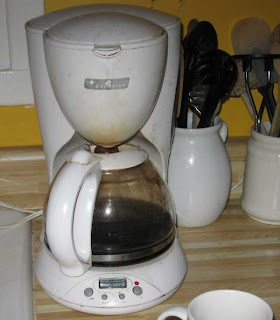 Instead of my weekly "Where I blog" picture I'm posting today a how I blog picture. I was up until late last night posting a story on Ashin-Mettacara.com and I only slept a few hours before getting up and being on the go all day.

I looked at the news, I read my papers and still nothing came to me... I didn't know what to write about. There was either too many things to say or not enough. Sure I could complain about the separatists again, or about the Conservatives, I could talk about Obama's plan to pull out of Iraq or the economic meltdown, I could talk about a million things but still, nothing came to me.

Instead, I thought, why don't I make my self a pot of coffee, wake up a little bit and see what comes to mind. The first thing (actually the only thing) that came to mind was: take a picture of your old, dirty coffee machine. After all why not? I owe so much to this magical beverage and this little machine, most of my decent blog posts were written at 5:30am with a cup of coffee, or late at night when the only thing keeping me awake was the coffee, most of my friendships spawned around a cup of coffee, studying for exams or doing work from home is usually done with a cup of coffee in hand.

So here it is coffee, my tribute to you little battered coffee makers... you have been my faithful companion for many years. Sure, I have a 200$ espresso maker and nice stainless steel cups, but nothing can ever replace you, my old and dirty machine.

We've been through a lot of sleepless nights and exhausted mornings together... Here's to many more!

Posted by Muchacho Enfermo at 8:11 PM No comments:

A tiny little article appeared in today's Globe and Mail, it was an article that talked about how "The Harper Conservatives now routinely delay requests for government documents – a right of Canadians under the law – well beyond the 30 days that the Access to Information Act requires." (a quote from the article)

Why aren't we obtaining our information and why people aren't speaking up about it just boggles my mind... I knew the previous Liberal government wasn't the greatest in this department, but they weren't staling, ignoring or delaying any requests beyond a reasonable period.

According to our Information Commissioner Robert Marleau speaking of a report he presented to parliament “I do believe that its results provide a grim picture of the federal government's access to information regime.”

Is this a sign of more to come under the current leadership?

Posted by Muchacho Enfermo at 7:51 PM No comments:

Today is the new lunar year for Tibetans, it is called Losar and is a very important holiday for the people of this small mountainous country (or at least what used to be a country).

"A lot of people were killed on March 14 (last year). In our culture, we don't celebrate Losar if someone in your family died during the previous year," Said a monk that was speaking to Mark Mackinnon of the G&M. This monk also spoke of a text message he had received that said: "To commemorate Losar, we will not celebrate, we will not fire fireworks, we won't wear new clothes, we won't dance, we won't sing. We will protest silently and we will pray."

As well a know China claimed Tibet for its own forcing his Holiness the Dalai Lama into exile in India. Since then he has been a promoter of peace and goodwill throughout the world. He has also been the most vocal supporter of an independent Tibet. As it stands now, Tibetans are now a minority in certain parts of their own ancestral lands, the Chinese government has moved in many settlers to try and assimilate the silently dissident population of this peaceful land.

Much information is available through the Government in Exile's website, including more information on incentives for native Chinese to move to Tibet, the force sterilization of Tibetan women, commerce (or lack thereof) and human rights violations.

Last year, prior to the Beijing Olympics, we all remember seeing the silent protest being violently stopped by Chinese soldiers, dozens were killed and hundreds became prisoners of conscience in this country that has always believed in passive resistance and non-violence. "As Tibetans, we are like cows, animals that have no freedom. I am a monk who likes the Dalai Lama very much, but I only dare like him in my heart. If I say it out loud I could be arrested or even killed," another monk is quoted as saying in the G&M.

This may very well be a lost cause because China is definitely a giant compared to Tibet's small, poor and peaceful population... in the end though we know that David always beats Goliath.

Posted by Muchacho Enfermo at 7:49 AM No comments:

Which Jew Hater do I write about?

Well well well.... looks like anti-Semite feelings are making a global comeback. Between bishop Richard Williamson (who was booted out of Argentina! yay!!!)who has yet to apologize for his statements and David Ahenakew (who will seemingly never apologize for his) it seems that Jew hating has become a trend once again.

I for one, am disgusted at this whole business, especially the Ahenakew story and the judge finding him not guilty of promoting hatred against Jews.

So instead of posting a long winded angry comment I'll just let the quotes speak for themselves and let you all be the judge:

David Ahenakew:
"The Second World War was created by the Jews and the Third World War, whatever it is, right now that war ... that wages on Israel in the Arab countries."

"The Jews damn near owned all of Germany prior to the war. ... That's how Hitler came in. He was going to make damn sure that the Jews didn't take over Germany or Europe. That's why he fried six million of those guys, you know. Jews would have owned the goddamned world. And look what they're doing. They're killing people in Arab countries."

They “f---ing dominate everything”
They “own the goddamn world”
Hitler “cleaned up a hell of a lot of things, didn’t he?”

Does that sound to you like a man who isn't guilty of promoting hatred against Jews?

For a more in depth analysis of the verdict please visit my friend over at the Nexus of Assholery, as always it's worth the read!

Marois: the little train that couldn't.

PQ leader Pauline Marois decided to use her opening speech at the Parti Québécois "National" council on Saturday to tell everyone present that Québec would be better off in this economic crisis without Ottawa... Isn't this the same person who complains that the money we get from Ottawa just isn't enough?

“Sovereignty is a pressing need” said Marois, saying that if Québec were independent of Canada it would have a seat at all the major international conferences and could push its own agenda.

I have a few words for Marois: nobody cares. Do you really think that if Quebec were a nation of maybe 6 million strong that it would be a part of the G8 or even the G20? Do you really think that with your broken English and your angry little fist pounding, anyone outside Saguenay would really give a damn? Do you think the world would just roll over and say "Wow.... Quebec is awesome, let's listen to what they have to say?"

Well my answer to all these questions is: no.

Outside Canada Quebec is insignificant at best. Economically Quebec would have nothing except hydro and lumber. The multinationals that employ hundreds of thousands would pick up and leave (just like in 1980 and 1995) and Quebec would be left alone, crippled, without Ottawa bailouts and money injections from big business.

It wouldn't be long before Marois would sell us out to the US and the precious "national identity" she so desperately pursues would be lost.