So yeah... Today in an chat with some friends, we decided to start a blog.
The new blog is called Serxy Druck Hero. Don't ask... If you want to know why just click HERE and check it out.

The authors of this blog will be Deya:) from aRRoz Con Punk and Wendy who up until this afternoon didn't have one yet.

Anyways, three different people, living in three different countries, writing about whatever the hell they want will be a welcome change from the seriousness of this blog. So please check it out, we'll be glad to have you reading and commenting!

Yes, the bastion of pro-Anglo-anti-French rhetoric know as the Bowl-Mat, a bowling alley in St-Eustache, is being forced by Québec courts to change it's name to "Amusement Bowl-Mat".

We can all sleep soundly in our beds tonight knowing that the language police is hard at work trying to eradicate any trace of subversion to the French language and God knows we're all thankful yet another dangerous bowling alley has been penalized. I applaud the language police and the courts for realizing that whenever I saw the name Bowl-Mat, it immediately made me want to forget any trace of my French heritage and pull my kids out of French school. This is exactly why I pay exorbitant taxes to my provincial government. God bless bill 101...

Please note the sarcasm above.

Posted by Muchacho Enfermo at 10:31 AM 2 comments:

A Reflection on July 26th 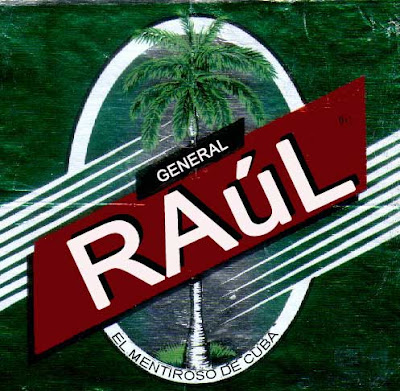 It seems like forever since I’ve written about my good friends the Castros. But I figured after reading some of the crap that came out of Raul’s July 26th speech to the “nation” that is was worth a few lines on my little blog. In this post I’m going to use quotes from two people, the first being Raul that I’ve obtained from various sources on the net, the second being a Cuban blogger named Deya:). She had posted something a few days before the speech that I thought would make the perfect answer or at least ask the perfect rebuttal to the supreme leader.

Castro’s speech on the 26th was, as usual, punctuated with a lot of useless rhetoric and fluff, when speaking of the hurricanes and the damage they did he said: “Many people mobilized and they stayed away from their families and homes, even when their own houses were damaged. They trusted the Revolution and they did their duty.” (Quote from the Cuban News Agency) 57% of the people who trusted in the Revolution are still homeless in Cuba following the hurricanes.

Those who aren’t and those who are now living a “decent” life are those who rely on their children, cousins, brothers and sisters living abroad… “I would like to ask how many pants, pairs of shoes and cell phones I have to send my dad to not miss him…” “Or how many computers and home decorations I have to give to my mom so that she doesn’t worry about if I am eating well, sleeping the hours that I need and associating with good people…” Says Deya:) in her post, (she is now living abroad.) The Cubans living outside long ago stopped trusting the Revolution, and a Revolution that forces children to support their parents, splits up families, makes mothers worry for the safety of their children living so far away and breaks so many hearts is no Revolution at all. “But, truly, if someone gave me some magic formula, I would kill myself to work even harder so that they don’t miss me so much or feel the impact of my absence, and so I wouldn’t feel that way about them.”

Castro talks about a return to the land to help with Cuba’s food shortages and the fact that they are having more and more trouble acquiring what they need from foreign sources. In referring to cultivating barren land he says "Let's see if we get to work or not, if we produce or not, if we keep our word." While agriculture might be the way to save people from physical starvation, what about the mental anorexia and the emotional famine caused by the Revolution? “You see, I sincerely wonder … When is this better future that the pro-Castro slogans promise coming. For what purpose and motive do they ask us to work more and harder? Where is this ideal we have been chasing for 50 years already?”

Castro also referred to the help of those abroad in the hard times after the hurricanes of 2008. “The Cuban people also thank the assistance, support and solidarity offered by people from many nations.” How much of that help was actually given by the millions of Cubans living abroad such as Deya:)? And is that really a solution? Because the island will keep being hit by hurricanes, disaster after disaster, how long can Raul and the people rely on those living abroad to survive? What is the real solution? “The solution is not to send money and things ... that is palliative. Nor is it staying there drying up, giving all your strengths, your hopes and your youth to the one who has given you absolutely nothing but promises and lies. I don’t have a solution, I would like one. I know this isn’t it. But this can’t be the natural order of things ...”


From his podium, in front of his crowd of sheep, Castro can pound his fists as much as he wants and yell “Fatherland or death! Down with imperialism!” all night long. But out of those 200,000 people in the crowd many of them are attending wearing jeans, shoes, hats and watches sent by loved ones who cry themselves to sleep every night far away from home working to help those left in Cuba. Those people in the crowd know the truth and know that Imperialism as defined by the Regime is not the enemy, the enemy is the one closer to home that keeps you wondering where your next meal will come from, how you will survive the next hurricane and the one that keeps you wondering how many children you will have to give up to foreign nations before things change.

In a heartfelt post, probably much more honest and true than Castro’s speech, Deya:) pours out her feelings; the feelings of a young woman, far away from her family her home and from those she loves. She is now on the outside looking in with a broken heart and teary eyes. “Obviously we aren’t on the right track. We will keep trying to find another, which may not be right, but I will keep trying for another. One that doesn’t involve so much pain, separation, hatred, repression and tears ... especially tears.”

(Deya:)'s original post can be found by clicking HERE)

Posted by Muchacho Enfermo at 6:00 AM 2 comments:

What Makes a Hero...

A couple of weeks ago, I had an conversation with a friend of mine about what makes someone a hero. I think that I just figured out exactly what my friend meant...

I have a friend, for the sake of this post let's call him Denis. This is going to sound horribly selfish, but most of the time I try not to think too much about Denis. The reason is that Denis is dying. He's a dying a slow agonizing death and there's nothing I or modern science can do about it.

10 years ago Denis was part biker, part musician, part government employee. Just a normal all around guy and just like everyone else who worked in his particular line of work, he ended up having some back pain. He went to see a doctor who put him off work for a few week to give his back a rest.

3 years later still unable to return to work he visits, very literally, an 8th doctor who finally tells him that his entire spine and the base of his skull is covered in metastatic tumors and that he is going to die, that he only has a few months left to live, to go home and get his affairs in order.

That was about 2 years ago.

Now Denis is still sick, the cancer now being generalized he is looking worse and he is still dying. But Denis hasn't stopped living. In fact he has put himself in an extremely painful experimental drug treatment, not in the hopes of curing himself but in the hopes of helping others in the future. Between treatments he has also starting organizing bi-weekly concerts in centers for troubled teenagers and giving free guitar lessons to these kids.

When I sit down and ask him what his greatest fear is he answers: "Who is going to look after my dog when I die..." There isn't an once of selfishness left in this guy, the physical pain doesn't seem to bother him, the prospect of death only scares him when he wonders what will happen to his best friend and companion after he's gone.

Denis is really and truly, for me and for all those fortunate enough to know him, a hero, in almost every sense of the word. I'm going to miss you man.

Posted by Muchacho Enfermo at 6:26 AM 4 comments:

When I think of fashion I always think of models that look like nothing but skin and bones waring size double-zero of XXXsmall. For years and years we keep hearing that the fashion industry is changing, that they will start promoting healthy living and women who actually look like women instead of anorexia and women that look like 12 year old boys.

Today, I was shopping for my sister-in-laws birthday present and walked by the add displayed in the picture above. The add features a woman (we assume it's a woman) that looks like she's been dead for at least a week, with no eyebrows, staring into the camera with a blank look on her face. The caption below reads "Fashion that is Sexy and Urban". I'm not sure what is sexy about being dead from having made yourself throw up so often just to have your picture taken for an add. Or what is urban about looking like a zombie.

But it seems to work.

Despite promising to promote healthy living the fashion industry continues to throw these ridiculous images at us. Despite the fact that a model clearly trying to look dead in no way, shape or form actually promotes healthy living. Our young women andn girls keep drinking this kool-aid. The keep making themselves sick to achieve what the industry tells them is the international standard for beauty.

Well... screw that. I never drank the kool-aid. I'm not going to be convinced that I should be attracted to women who look like this and I'm certainly not going to buy into this whole "the industry cares about young women" attitude that they've been trying so hard to make us swallow.

Posted by Muchacho Enfermo at 10:58 AM 2 comments: