Triumph of the Human Spirit

It's an expression I tend to use a lot: "Triumph of the human spirit". Although in the case of The Alternate School in St-Lambert, I honestly don't think I could find a more fitting way to describe it.

I read in the Montreal Gazette this morning an article by Mike Boone about the diplomas ceremony held last night for the 11 graduates of this school. (Honestly it was one of the better written pieces I've seen in the Gazette in AGES.)

For those of you not familiar with the Alternate School, let me explain... it is a school here that was started by local teachers. The school caters to kids who have had a "difficult" life: children who were victims of rape, sexual abuse, drug users and all sorts of other things much to personal to mention here. Over the years I have known a few graduates from the Alternate.

I just want to take a minute to congratulate these kids when the world stopped caring about them, they never stopped caring about themselves. Even though it was an uphill battle in a place like the Alternate they found hope in each other and strength within themselves. No matter what they decide to do with their lives I know they will succeed because they have already overcome everything life has thrown their way. Congratulations to all of you.

Posted by Muchacho Enfermo at 5:30 PM No comments:

Chavez Blames US and EU for Unrest in Iran

After some of the international community has spoken out against the violence in Iran (or at least pretended to) and after president Obama addressed the issue; ut should come as no surprise that self-made arch-nemesis of the US, Hugo Chavez is blaming the US and Europe for the uprising in Iran.

Now... here's a point I'd like to make to President Chavez in regards to his comments:

Just because you didn't like Bush and probably don't like Obama, it doesn't mean that you have to contradict everything that the US has said. If you'd like to accuse the US and Europe of inciting these riots please provide proof because so far certain sources say over 150 people have died and, as far as I know, they were ALL civilians.

Are you saying that the militia that is killing civilians backed by the US?
Or that the Iranian military is funded by Europe?
Or are you blaming the US and Europe because the PEOPLE WANT TO BE HEARD?
Or... are you just being contrary because it's what is expected of you?

Either way... you've managed to stay in power this long, a lot of your people genuinely admire you and some will believe everything that you say, so please, when you are going to blame the entire world for something without providing proof... please be aware that your words can have real consequences for the people living inside your borders.

A word of advice, before you decide to accuse any nation of something like this again without having proof, remember the story of the little boy who cried wolf.

Posted by Muchacho Enfermo at 7:39 AM 2 comments: 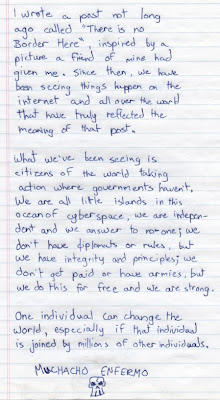 Posted by Muchacho Enfermo at 8:39 AM 3 comments:

Labels: iran, there is no border here

Canadian journalist Maziar Bahari, a Concordia graduate who has dual citizenship Iran-Canada, was "arrested" today and is being held without charge.

He has been working for Newsweek magazine for the last 11 years and has been living and covering Iran for many years. He was arrested today while or after covering the ongoing protests in Tehran. In a statement Newsweek said that he is being "detained without charge by Iranian authorities and has not been heard from since."

Reporters Without Borders claims that 23 journalists have been arrested in Iran since the contested election. In the case of Mr Bahari however, his dual citizenship might slow or stop his release altogether, as we have seen in the past with the Iranian-Canadian Blogger Hossein Derakhshan (AKA the blogfather).

Please write to your MP in parliament to urge the Canadian government to pressure Tehran for his release.

(Source for quotes: the Montreal Gazette)

Posted by Muchacho Enfermo at 11:47 PM No comments:

AmandaMilano RT there is no fear here now..i feel it in the air. we all are ready to become martyrs. why live if you are not free.no point. #iranelection

baveel RT If an innocent girl gets shot halfway across the world, does she make a sound? Yes, the whole world hears her. #iranelection #neda

sashamakila RT To those outside Iran- Change your Timezone to +3:30 Tehran and location to Tehran to help hide twittering Iranians #iranelection

Posted by Muchacho Enfermo at 11:20 PM No comments:

Montrealers show their support for Iran 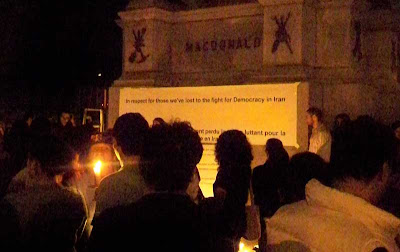 Last night around 9pm there was a vigil for those who died in Iran following clashes with armed forces.

I attended because I wanted to show my support and my sympathy. It was a candlelight vigil and most of those in attendance wore the color green. A few hundred people at most attended the vigil, but I loved seeing people of all colors and all walks of life in attendance, people with their children, people speaking French, English and Farsi, students, elderly people.

Even if those in Tehran can't see us, we were with them in spirit and we will continue to do so. Today there will be a rally at 11 a.m. at Dorchester Square and I encourage all those who can to be there or to go to similar rallies in your cities.

Posted by Muchacho Enfermo at 9:45 AM No comments: