Images of the week 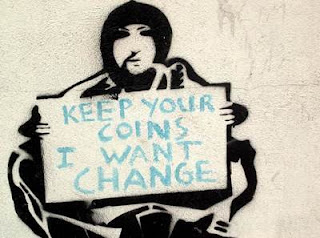 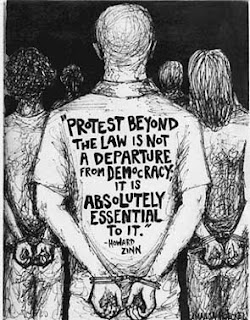 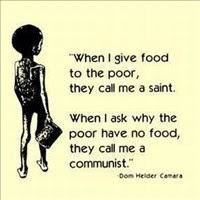 Posted by Muchacho Enfermo at 12:20 AM No comments:

In a story that makes you want to, at the same time, clap and cheer for the police who did a good job and turn vigilante on the accused, the Montreal Gazette reported that over 50 Canadians arrests had been made in an operation aimed at busting a child pornography ring, called Project Salvo.

Charges are now being laid against the suspects, including two Montrealers, the charges include sexual assault, sexual interference and possessing, and making and distributing child pornography.

To quote the Gazette in the case of the first arrest made in Montreal: "A 49-year-old man appeared in Montreal court on Saturday and was released after being charged with possessing and distributing child pornography."

In regards to the above quote, I have a question that will probably remain unanswered... Why are we releasing this man pending trial? It seems to me that if he is accused of anything in regards to child abuse or pornography, due process should be thrown out the window and he should be remanded until his trial date. We don't want scum like this on our streets.

I want to cheer on the police and the task force who worked on this whole operation to see these arrests be made, but I find it insanely frustrating that our criminal justice system lacks the proper safeguards to ensure that these people don't see the light of day again, at least until they have served their sentences or are found innocent in a court of law. I also find it very frustrating that the most they will get, because they're in Canada, is a slap on the wrist.

Our children are our most previous resource and should be treated as such, sentences handed out in the event of the exploitation of these resources should be severe and carry a heavy cost to the offender. Our penal code needs to be re-tooled in order to ensure that these offenders are adequately punished and our children are kept safe.

I, for one, am going to lobby the Conservative government not only to get "tough on crime and repeat violent offenders" but to get much MUCH tougher on child abusers. I encourage you all to do the same.

Posted by Muchacho Enfermo at 9:06 AM 3 comments:

In today's Globe and Mail separatist Parti Québécois leader Pauline Marois is quote as having said :"The Montreal Canadiens is more than just a professional hockey team, it is part of the social and cultural fibre of the Quebec nation."

Coming from a woman who made a vicious attack on long time Habs captain Saku Koivu for not speaking French in his two line introduction on the jumbo-tron, her bid to convince La Caisse de Dépôt to purchase the team seems to be based on the fact that the team was a profitable investment for the current ownership.

If the Canadiens were bought by the province's pension fund, as Marois is trying to assure, would she then change the name because it doesn't sound separatist enough? or because it has federalist connotations? Or would she find a way to lobby the new ownership to try and stop drafting Europeans and English speaking people? Or force all them to take french courses?

I'm not sure, but I just don't like it when someone who vehemently opposes anything Canadian wants to buy something that so clearly represents a piece of Canada's heritage, the Canadiens.

Posted by Muchacho Enfermo at 6:07 AM No comments:

If only the French fought the Germans this Hard

I read today about yet another case of French workers taking their boss hostage to try and negotiate a better severance package after being laid off.

The only time I got laid off, I didn't think of taking my boss hostage to put pressure on my employer... I thought of getting a lawyer to negotiate my severance for me and hope for the best. It's insane how fast France seems to riot and take things to extremes sometimes.

I just thought about this because I couldn't help but smile and think to myself that if they'd fought the Germans this hard in WWII things would have been much different.

Posted by Muchacho Enfermo at 10:08 AM No comments:

Again? You can't be serious! 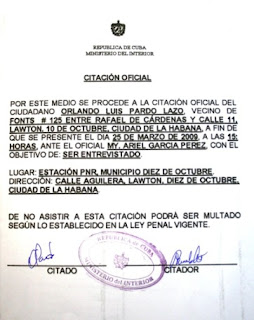 After I found out that Ciro Diaz and Claudio Fuentes were back home safe and sound yesterday I breathed a sigh of relief. The entire ugly ordeal was over for now, everyone could get some rest. I was so happy to see such a quick mobilization of the blogosphere, everyone who posted about it on their blogs, gave contact information for the policeman who had detained both of them without reason, spoken of their outrage on their blogs and those who gave the world up to the minute updates.

I was happy that it was over and that I could get back to complaining about other things...

However, my relief would be short lived.

Orlando Luis Pardo Lazo, author of many books including BORING HOME which I hosted digital copies of on this blog on the day of its launch, which was banned by the Cuban government. He is commonly known as OLPL and he has been summoned by State Security for questioning.

Hopefully this will be a short round of questioning and he will be swiftly released, but again I find myself in shock at the harassment faced by these writers, artists and bloggers, for doing something we take for granted: talking about our feelings and our politics.

Posted by Muchacho Enfermo at 9:32 AM No comments:

"We wish everyone to know that we, Cuban writers and artists, and also dream makers, are with Fidel now and always"
A quote attributed to Cuban artists in the Luis Baez book Absolved by History (previously pictured on this blog as being flushed down a broken toilet for being utter garbage and a propaganda tool sold to tourists with little or no literary value)

It has been over 24 hours since Ciro Diaz and Claudio Fuentes boarded a bus to go visit to Placetas to show their support political activist Jorge Luis Garcia Perez (Antunez). As far as we know they are still in state custody.

Call. Make inquiries. Pretend you're from the foreign press. Anything.
Stay tuned for more.

Posted by Muchacho Enfermo at 6:58 AM 2 comments:

Antunez is still in critical condition following a month long hunger strike to peacefully protest the treatment of prisoners of conscience in Cuba and the abuses of the Castro regime. Antunez, who had written an open letter to president Obama last week, was previously jailed for over 17 years by the Regime.

As far as we can tell, no charges have been laid against Claudia Fuentes or Ciro Diaz and the reasons behind the arrests remain unknown. In fact they are not likely to be known until they are freed or the state decides to lay charges publically. In Cuba an arrest warrant is an abstract concept and is not needed in order to detain someone and people can be held at the whim of the government and the infamous Cuban Gestapo, the G2.

In the past year we have seen harassment of the dissident elements in Cuba, who’s 50 year old Revolution claims to give a voice to the people, grow to levels that have not been seen for quite some time. Bloggers such as Yoani Sanchez and Claudia Cadelo have been called in, along with reporter and blogger Reinaldo Escorbar, for “questioning”; prize winning author OLPL was threatened with bodily harm by agents of the state prior to the launch of his new book; more recently Claudio Fuentes Madan along with members of Porno Para Ricardo were detained twice in the same day but were released with only fines to pay.

The excessive repression of the Castro regime is well known to the international community and is a constant source of debate, but when a photographer and a musician get arrested for showing their support to a man who is quite possibly dying of hunger, things have gone to far.

A Tale of Surreptitious Theft...

Last night I was on my way to the Hockey game (yes the capital H was intentional) and I was sitting on the bus waiting to go to the arena. As I was waiting for the bus to leave I notice an unattended shopping bag on one of the seats at the bus terminal.

There were dozens of people that walked by and glanced at the bag casually but kept on walking to their destinations. Then I see a woman in her 40s walk towards the bag, looking around to see if anyone is watching her. She casually takes a seat next to the bag, lights a cigarette, and just sits there glancing inside the bag and trying to act non-nonchalant.

She notices me looking at her from inside the bus. She gets uncomfortable but she does move from her seat. I tried to get a picture but the glare off the bus window prevented me from getting anything usable. As she sat there, her facial expressions went from happiness at finding free loot, to fear of getting caught... she clearly looked torn about the whole thing. She kept looking at me as if it was some kind of show-down.

Finally the bus left and I was off to the game, I didn't see if she took the bag as the bus left, so I won't make any assumption. It was just funny watching someone trying to be so casual while at the same time being so nervous. I'm hoping she took the bag to lost and found or that the actual owner of the bag returned, but I doubt it because in this day and age it seems that even we adults are willing to apply the old "finders keepers" rule.

Posted by Muchacho Enfermo at 9:44 AM No comments: