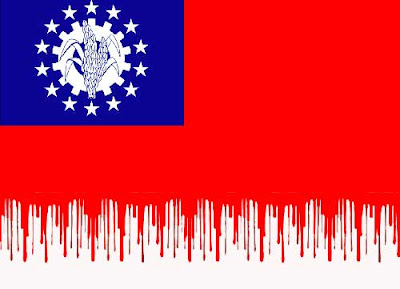 The Associated Press reported this morning that Myanmar's opposition leader and Nobel Peace Prize laureate Aung San Suu Kyi will see the length of her house arrest prolonged by 18 months. A time in which she will allowed to have access to state doctors and state media.

The sentence came after an American (who was also on trial) swam across a lake to reach her home and she allowed him to stay there for two days, thus breaching the terms of her house arrest. John Yettaw, the American, was sentenced to 7 years including 4 years of hard labor even though he claims that he swam across the lake because he had a vision from God that Suu Kyi's life was in danger.

The Junta, which imprisons just about everybody and their dog for no particular reasons, decided today to reduce her original sentence of 3 years hard labor to 18 months house arrest, probably due to international pressure. Besides... the arrest keeps her in state custody long enough that she will not be able to run in upcoming "elections" planned for the fall.

The international community is said to be outraged, the UN is outraged and Nobel Laureate Archbishop Desmond Tutu is down right pissed off... Let's see if this time the international community steps up and throws more than just empty words in front of the cameras, let's see if they can grow a pair and do something concrete to help Myanmar and rid them of this totalitarian regime that is plaguing the already battered people of this country.

Posted by Muchacho Enfermo at 10:56 AM