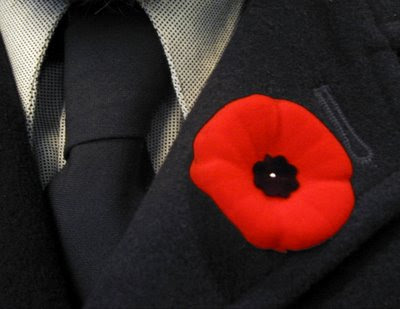 While I was sitting at my laptop writing a post (unpublished as of yet) recapping my Remembrance Day with my grandfather so total asshole decided that he would rob the Legion in Scarborough Ontario of the money that veterans collect with the yearly sale of Remembrance Day poppies.

The Globe and Mail reported an armed man entered the basement of the Legion building where veterans were counting the donations received in the annual Remembrance Day campaign. He pointed a gun at an 84 year old veteran and demanded all the "bills".

The veteran lunged at the man with the gun and tried to subdue him, with the help of another veteran, who was 64, the intruder dropped his gun and fled on foot.

I'm not sure what kind of idiocy compelled the would be thief, I mean really... Is there no respect left in this world that someone would rob elderly war veterans of the money they collect for charity? And to do it after the one day of the year the entire nation stops to honor them?

I sincerely hope the police catch this man, put his face on the news and make sure that the entire country knows who he is.

Posted by Muchacho Enfermo at 10:02 AM