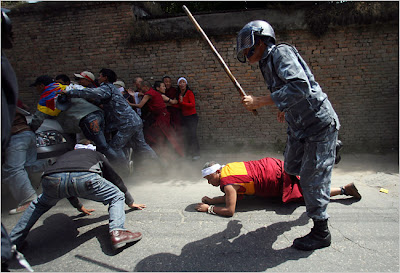 In a press conference held by China's communist party prior to the long awaited arrival of US President Barrack Obama equated China's invasion of Tibet in 1959 to Abraham Lincoln freeing the slaves in America.

That's right folks, the communist regime that limits speech, screens the internet, massacred people in Tienanmen Square and portrays the Dalai Lama as a "violent separatist", did not in fact (as well all previously thought) annex the peaceful nation of Tibet in 1959. No, we were wrong, they liberated Tibet from under the oppressive thumbs of the Nobel Peace prize winning Dalai Lama.

It's a good thing that China's government is there to clear things up for me, because up until this point it appears that I had misinterpreted the photos of Chinese soldiers executing monks in the streets and burning buildings; it appears that world news agencies also doctored the footage of Chinese military violently silencing peaceful protesters in Tibet prior to the Olympics.

China is entitled to their opinion on the matter and I'm glad that it is being shared with us, especially prior to the arrival of the "leader of the free world". Because, to paraphrase Beijing: "The President should really understand China's point of view, seeing as how he is black and black people were slaves... And they were liberated right? So yeah, that's what we did in Tibet! Only we just thought of it now, like 60 years after the invasion...sorry I meant Liberation. See? We really care about the people of the world. So Mao is a really cool guy, no worries there."

For my part, I'm just not buying what Beijing is selling. Mao might be a lot of things but the one thing he is not is a caring liberator of oppressed people.

Posted by Muchacho Enfermo at 6:13 AM