English Performers are Not Welcome 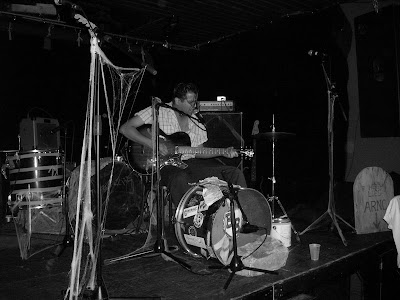 Whenever St-Jean Baptiste (Québec's "National" Holiday) holiday rolls around on June 24th, the language tensions in this province seem to increase by a factor of 10. But still, most of us go out and celebrate the holiday nonetheless because it is after all, a paid day off and an excuse to party with friends.

This year I was at least little excited that there was an alternative to Montreal's big party at Parc Maisonneuve (a party and free concert that features exclusively French and separatist groups where hundreds of thousands show up and chant nationalist slogans), the alternative was called "L'autre St-Jean" or "The Other St-Jean" and is being held the night before on June 23rd.

L'autre St-Jean billed itself as an alternative to the June 24th concert that draws on artists from all over Québec and political support for its production. It was a huge concert organized by a local production company featuring only local artists French and English alike, to better represent Montreal's cultural diversity which the other concert tends not only to ignore but to frown upon.

Now the only two English artists slated to perform at this concert have been banned from making an appearance because they are English performers. This happened after one the sponsor of the concert threatened to withdraw its funding if English performers actually got on stage and sang in English.

Bloodshot Bill and Lake of Stew were advised Thursday by email that they would no longer be allowed to perform.

Bloodshot Bill is quoted in the Gazette as havings said:
“I was going to go up there with Lake of Stew and we were going to play some songs in French.”
and
“The reason they set up this event was for it to be different, so why are people freaking out because it’s different.”

His calls and email to event organizers were ignored.

In a city that has the largest International Jazz Festival, in a city where there are over 100 languages spoken daily, there is still enough xenophobia to bar English performers from celebrating the place they grew up in. I for one, this year, will be closing all my windows and shutting the blinds of my house and not come out until the celebrations of intolerance are over.

Posted by Muchacho Enfermo at 6:13 AM