Commie Rhetoric in my Town? 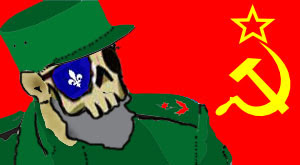 With this new publication they hope to enlighten the masses and bring us to the conclusion that only must we abandon our current economic system, but we must surpass it and embrace something new. "Our economic system itself, is based on the accumulation of endless profits and is largely responsible for the problems we are currently experiencing. It is time to revise the system to place the humanity at the center."

It is no surprise that they are launching this manifesto on the even of May 1st, International Workers Day, usually a day of riots and protests in Montreal and around the world. Oh yeah and in case you were wondering, the spokespeople for Québec Solidaire are the ones calling this publication a manifesto, I didn't put that word there for fun.

I'm sorry folks, but the commie crap just won't fly with me. I've seen first hand what communism does and anyone who has will agree with me that socialism is not the key to solving an economic crisis. EVER. Have we learned nothing from Cuba and the old Soviet Block? How much aid do we send to North Korea for food? And OUR economic system needs fixing? Please...

Not only is this party communist but they're separatist as well... So if they had their way Quebec would be a socialist nation of unemployed unilingual French people starving to death on the streets waiting for their promised utopia, their El Dorado, that will never ever come.

It's a good thing that no one votes for these people because then I'd start to get worried...

Posted by Muchacho Enfermo at 7:11 PM

The illustration is wonderful!