Women must be executed for... shopping?

I read today in a blog I fallow called A Reluctant Mind that in the city of Mingora in Pakistan the Taliban have declared that all women entering the market will be executed. This was originally reported in the Daily Times.

To most of us in the west this seems crazy... as it does to most people living in urban centers in Pakistan. But the bottom line is that things like this happen even in a country that is considered a major US ally in the fight against the Taliban.

I'm just really at a loss for words I'm just in shock... 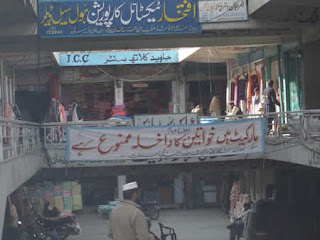 "‘Women are not allowed in the market,’ reads a banner displayed at the entrance of a market in Mingora. Taliban have banned the entry of women in markets and ordered the killing of women who violate the ban. Most shop owners have sold or shut down their businesses because of falling sales following the restriction." Daily Times

Posted by Muchacho Enfermo at 6:32 PM

Yup. That's the world that the so-called "peace" movement is in favour of.

Just makes you want to break out an acoustic guitar and sing some John Lennon songs, doesn't it?

Yeah it does a little bit... maybe I could ask Layton could teach me a couple of them.