The Cultural Dictionary (from dictionary.com) defines xenophobia as: "An unreasonable fear, distrust, or hatred of strangers, foreigners, or anything perceived as foreign or different."

Somehow though, I simply don't think that the word is strong enough to describe what the English minority in Quebec has to face when it comes to extremist separatist groups. The latest example of what I call uber-idiocy, a group that calls themselves Le Comité d’action politique pour l’Indépendance nationale, decided that it would be a good idea to protest the building of the
McGill University Health Center (MUHC) by planting 101 wooden crosses and a banner symbolically painted in red. 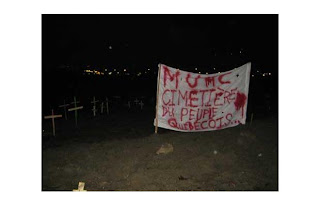 A statement sent to the press said: “This cemetery of crosses, in the image of cemeteries for soldiers fallen in the two Great Wars, represents the Québecois people who, after centuries of battle, are finally conceding to the English-speaking pressure on the continent. The cemetery is accompanied by a banner claiming high and loud the death of a people, signaling that the MUHC represents nothing less than the death of the Québécois people, and it expresses the people’s rejection of an assimilation like that which they have always resisted until now in a continuous, and perhaps perpetual, struggle.”

I resent the entirety of this statement, the separatists group have no right to even equate themselves to the brave young Canadians who fought in both Great Wars, as Canadians. The also have no right to protest the building of this hospital as there is also a super hospital being built for the Université de Montréal.

Once again, the extremists of this province have given my people a black eye on both the Canadian and the world stage.

To the rest of the country we're already strange enough and every week I talk to people in Toronto, 5 hours up the 401 highway and they have no idea that people in Montreal speak English as well as French.

If idiots like this group keep grabbing headlines, what hope does Quebec ever have of attracting foreign investments, preventing a brain drain and of being taken seriously on the national stage?

Posted by Muchacho Enfermo at 9:49 PM