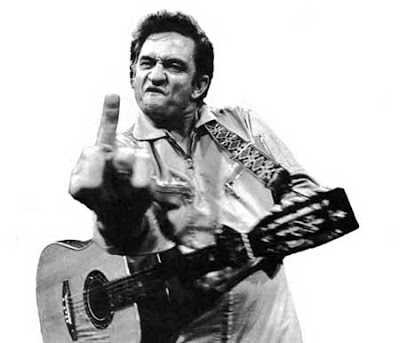 I remember the first time I heard Johnny Cash's version of Personal Jesus... It was quite a few years ago, when he was still recording his famous American Recordings series of CDs.

I remember sitting down at home and listening to it on my old RCA mini stereo that didn't work properly; but for Johnny Cash the CD player stopped skipping, the speakers stopped sounding ripped and the world outside of my room stopped turning for 3:23 seconds. Hearing the Man in Black's voice, one that I'd heard since my early childhood, singing those words just struck a chord with me.

Before then and since then, Cash has been a huge part of my everyday life. As any Cash fan will tell you when you listen to his music it's not like being a fan or liking it: it's more like a personal relationship with the Man in Black.

At parties we still hear his music, in our cars we play his songs, when I'm sad or angry I listen to his voice. It's like there's something inside that deep voice and those chords that understands exactly how I feel at that specific moment, that puts a hand on my shoulder and says "Muchacho... I've been there man, I feel your pain/sadness/loss." I don't think that there has been another musician who's encompassed so many of the world's hurt and problems into his songs or his words.

Granted, Cash's music isn't for everyone. Not everyone will walk away from it feeling like they've been touched or understood; so it's hard for me to explain exactly what it's like to have constant companion and friend that I'll never know, so I'm not even going to try. The best way I can think of is to tell you to just take some time and listen, really listen... close your eyes, pour yourself a glass of something strong and listen; hopefully you'll understand.

Posted by Muchacho Enfermo at 6:00 AM

Amen to that! I couldn't have said it better myself.